9/11 Memorial - Largest Man Made Fountains in the USA

I remember the 9/11 tragedy like it was yesterday.  I was a high school math teacher at the time and we turned on the TV in my classroom to watch the news.  Just moments after tuning in, myself along with 21 ninth grade students watched Tower #2 get hit by the plane on live TV. The confusion and worry immediately overwhelmed our classroom, the school and our entire country. We will never forget the innocent Americans who lost their lives on 9/11 and we will always keep these families close to our hearts.

In memory of the tragic events, and resting in the location of the fallen towers, lays a magnificent pair of memorial fountains.This incredible water memorial opened on September 11, 2011 marking the 10 year anniversary of the horrific events.With a cost of over 500 million dollars to construct, the pair of water features includes a massive pump system that pushes over 52,000 gallons of water per minute. The water flows over dynamic 30 foot tall black granite walls and includes a one acre pool. It truly is an inspiring and passionate design. 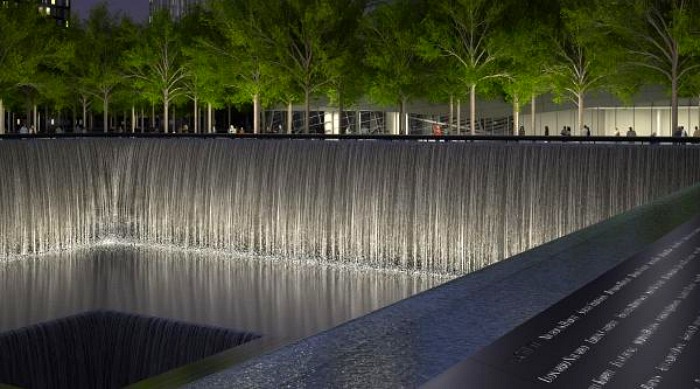 There were initial concerns of the fountain being too loud, however after testing the flow of the water the engineers determined the fountain is perfect and the sound is ideal for the area. It creates a natural and peaceful sound almost like bringing the ocean into the downtown area of New York.

A second fountain over the footprint of the south tower completes the memorial and is equally as impressive. The two fountains together make up the nation’s largest man made waterfalls, and are at the heart of the design of the memorial.The entire project is referred to as Reflecting Absence.

The reflecting pools covering the exact footprints of the Twin Towers are surrounded by the names of all the victims of the 2001 and 1993 attacks, etched into bronze and back-lit so the names can be read at night.

As mentioned the two fountains circulate approximately 52,000 gallons of water per minute. The water is chemically treated similar to a swimming pool and also heated so the feature can be enjoyed during the winter months. The water rushes down the black granite side walls at a rate of four feet per second, and the entire volume of each fountain circulates through the system every 22 minutes. The fountains also include a filter system to keep out coins in the likely event that visitors toss them into the pools of water.

Officially called the National Sept. 11 Memorial, the site includes a 9/11 museum below the plaza, that opened a year after the memorial fountains.

We will never forget the tragedies of 9/11 but it is great to see this incredible water feature and memorial in New York.The movement of the water and sound produced by its beautiful flow give life and hope, and represents the memories of the loves ones lost during the World Trade Center attacks in 2001.