A Look Back at Ancient Roman Water Fountains 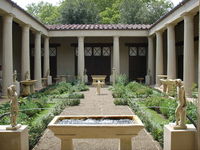 According to Encarta, the Ancient Romans received some 38 million gallons of water through their elaborate aqueduct system. There were no special pumping mechanisms required for the system because gravity was pulling it from the nearby hills and mountains. Once the pipes were connected to the appropriate water source, gravity guided it down and towards the city, where it was then supplied to various fountains, homes, palaces and buildings.

Each Ancient Roman water fountain was connected to two different water-supplied pipes. If one pipe was damaged, lost its water source, or otherwise stopped working, the remaining pipe would supply water to the fountain. This turned out to be a highly effective fail-safe mechanism for keeping the city’s water fountains up and running.

One of the engineering marvels of the Ancient Roman empire was their use of a water-supply plumbing system, feeding water to residents throughout the city. Below the bustling city streets lied networks of lead pipes. These pipes fed water to fountains placed on intersections and street corners, as well as residential homes and palaces throughout the city. Historians discovered the pipe-fed fountains when excavating the site of Pompeii, where Mount Vesuvius erupted in 79 AD, preserving the city and its contents for centuries to come.

During the excavations at Pompeii, historians and archaeologists also discovered ornate water fountains set up inside the courtyards and atriums of wealthy homeowners. These weren’t your typical “bowl” fountains that were seen by previously civilizations. Instead, the Ancient Romans invented brilliant, highly detailed fountains embedded in stone statues.

Of course, there was a good reason why so many people referred to Rome as “the city of fountains.” Sextus Julius Frontinus, Rome’s appointed water guardian, stated that the city had 39 “monumental fountains” and 591 public basins. These numbers do not include private residential fountains and bathhouses.